This story is purely based on my own experience using ProtonVPN service.

I am starting with their 7-days free trial, which gave me the trial for their Plus plan ($8/mo).

In short, I am really satisfied with their 7-days trials but will give a try their free tier plan first once my trial period ends.

It’s still two days before my trial ends, so I’ll tell the story I’ve gone through during this trial.

Yes, I said I am really satisfied with their 7-days Plus trial, but I don’t mean it was smooth sailing.

After discussing with my own self about if I really need a VPN, I decided to look at some recommended VPN providers on the internet.

Why I choose ProtonVPN in the first place?

Simple. It’s offering a Free plan, which I confirmed with them that I can upgrade if I needed a higher plan.

At this point, I still have no idea if they will give me the 7-days Plus trial after I’ve signed up.

For the first two days, everything works smoothly.

But not for the next days, when the problems are starting to show up.

On the third day, I always run a problem that it’s getting very slow near midnight.

The same problem occurred around the same hours on the fourth and fifth day of the trial.

But this problem will go away as soon as I restarted their app ( I am using the latest MacOS Mojave. Updates: Soon, this will be MacOS Catalina ). 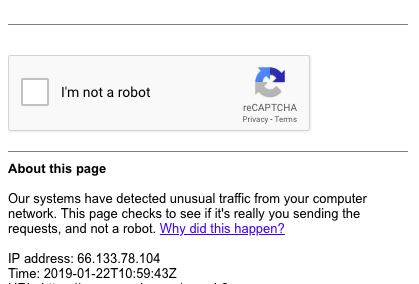 Another problem I have is when accessing Google.com, sometimes Google is asking for human verification like the screenshots on the right.

It’s a bit inconvenient, but since I hardly used Google when I am connected to their VPN server, it does not bother me too much.

In fact, it’s not always happening when I switched to another VPN server.

I am not a paying customer, so I just try to contact their support through their Twitter.

Initially, I don’t expect too much because:

But I still give it a try and sending a tweet to them, which ends up to be a little conversation.

However, their response is beyond my expectations.

They reply within 1 hour, in fact, it’s probably only 10-15 minutes after I send my tweet about the problem.

Here’s my conversation between me and their support on  Twitter.

Giving the fact that I am not even a paying customer, and still not decide to go for their paid plan, I can say their support is top-notch.

They reply to me quickly, pointing out the possibilities of the problem, and pointed me to some of their articles to help me.

Though in the end, they said that the problem may be with my ISP provider since they did not see others sending the complaint like me.

Since I realize that I am not a paying customer, I decide to test my ISP — of course, I am not giving them a phone call and asking if they’re blocking my connection to the VPN server.

Here are how I test if it’s the problem on my ISP and not on ProtonVPN servers:

Honestly, I still don’t believe that it’s that my home ISP who’s trying to tamper my connection to the ProtonVPN server (as they said on their replies on Twitter).

The fact that my internet connection to ProtonVPN is working again when I:

is the proof that my ISP did not block or tamper with that.

So, ProtonVPN is just blaming my ISP for their own problem? No. Because if they did this, I will see many other folks flooding their Twitter with a bunch of complaints.

Then, what’s the problem? I am not sure but I suspect that my ISP may have a glitch to connect to the ProtonVPN server. Again, this is just my hypothesis for the thing that most-likely caused my connection problem with ProtonVPN.

Will I sign up for their paid plan? Most likely yes, but I want to give a try their free tier plan first.

If their free tier plan is enough for me, I’ll still consider to sign up for their paid plan because I just want to support them to provide those “free tier” plans for others.

Based on my experience, if you’re going to buy their paid plans, I would suggest you to choose the “Plus” plan at a minimum. I had tried their “Basic” plan, but it was not a good experience.

Luckily, the ProtonVPN keep their promise for 30-days money back guarantee. Soon, I’ll go with their “Plus” plan.

My fastest VPN on Digital Ocean

Since the COVID19 outbreak in this world, both VPN providers I used to pay are getting slower. I often get disconnected. Even worse, connecting again usually takes forever. Contacting their support doesn’t help. More people are going to use their service to…  Read more » My fastest VPN on Digital Ocean

How to get DigitalOcean $100 credit for free?

These are the steps on how to get DigitalOcean $100 credit for free. Be mindful the $100 credit you’ll get will expire in 60 days if you don’t use it.

Problems that forced me to leave ProtonVPN for Mullvad

This purely based on my own experience with both VPN apps. Others may find it different because there are so many factors involved. Please keep in mind that Mullvad doesn’t have an affiliate program at the time I write this.…  Read more » Problems that forced me to leave ProtonVPN for Mullvad